The most effective among the pieces are those animals or birds that convey a state of tension or movement or brute strength, something that struggles against gravity to maintain its force.

The artist often refers to his art form as „The Theater of Nature.” One must see and be touched by Tomaszewski’s work to understand fully the depth of this description… Tomaszewski’s sculptures have become increasingly popular with modern-day art connoisseurs. His works can be found in many of the most discriminating private collections in this country and abroad.

Striking and dynamic as Tomaszewski’s sculptures are, his 'fire paintings’ done by scorching and even burning out great sheets of paper, are the scene stealers in this powerful solo show. 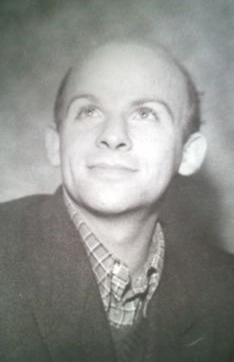 Born in 1923, alumnus of the Warsaw Academy of Fine Arts. Student of the Warsaw University of Technology, is an extraordinary artist, searching for his own artistic way. Ambitious, he aims at creating art nobody else has ever created. He is a representative of experimental realism, a versatile sculptor and painter in love with music, nature and women beauty. He inherited his remarkable humanistic and musical talent from his mother, whereas from his father he inherited his technical and engineering talent. Thanks to this exceptional mixture of genes, Tomaszewski combines an engineer’s approach to nature and human beings with the ability to uncover the human soul. He knew he was an artist from the very beginning. He learned to paint before he could even talk: he made his first realistic drawing at the age of two and a half. The complicated course of events led him to settle down in New York region, the city became his new home, where he could find his way to artistic freedom and fame. He has over 150 individual and group exhibitions around the world to his credit. His works decorate the private studies and houses of Lawrence Rockefeller’s family and of the former President of the United States Jimmy Carter.
Lubomir Tomaszewski creates using three different kinds of media: sculpture, paintings “painted with fire” and porcelain. As a sculptor, he uses ready fragments given by nature: stones or rocks, pieces of wood and bark, and combines them with metal or glass to create unique representations of animals, figures or forest spirits. As a painter, instead of a brush, he uses a torch.

The technique of painting with fire and smoke offers not only amazing expression possibilities: it makes it possible to achieve the effect of lightness and dynamism, but also an amazing force of expression. No paint can produce such results. What makes the paintings so captivating is their ethereality and power that has a strong impact on the viewers and touches their emotions. Tomaszewski has been mastering this technique for over 20 years.
While creating porcelain figurines, Professor Tomaszewski approaches the subject with great passion, as he treats them as small sculptures. He works on his own unique style and believes that by designing small-scale sculptures he gives people something beautiful, with modern shapes, something that increases the aesthetic level of the society. His adventure with porcelain figures started in the 1950s in the Institute of Industrial Design, where he used to work.
LubomirTomaszewski’s excellent education, his talent and his extraordinary abilities to observe nature and contemporary art led him to found an international artistic movement: he is the spiritual father and the leader of the Emotionalists, a group established in 1994, formed of painters, sculptors, designers, photographers, dancers and musicians.
The New York Times called him “a motion sculptor”. By his works Tomaszewski proves that popular, not necessarily highly abstract, art can bring great joy to many people, but can also evoke other emotions, such as anxiety or fear. Thanks to the fact that he depicts and evokes emotions that are shared by many people, his works are found in private collections, corporations, museums and galleries around the world, and the number of admirers of his sculptures and paintings is constantly growing. LubomirTomaszewski’s works are included in the collections of the National Museum in Warsaw; the National Museum in Kraków; the Warsaw Rising Museum (Warsaw); the National Museum in Wrocław; Halle Museum (Germany); Robert Marston, INC.; Marvin Gliman; Lighting Services INC.; Lawrence Rockefeller and the Rockefeller family; the Ziselman family (Caracas, Venezuela); Jimmy Carter, former President of the United States; T. Komine of Kyowa Bank (Tokyo, Japan), and others.

Seldom on the art scene does an artist appear who sets new trends and creates new artistic movements. Lubomir Tomaszewski belongs to this small group. He was the person who in 1994 cooperating with the painter Aleksandra Nowak and the dancer Kathryn Kollar formed the group In tune with Nature. In time, more artists joined them and eventually a new international movement was established: it was called Emotionalism. Emotionalism is about a wealth of feelings and moods, about reaching deep into human experiences. Lubomir Tomaszewski is the ideological leader of this movement: he is a conscious and consistent leader who can see the connection between all art forms, such as painting, sculpture, engraving, photography, but also dance and music.

…he is the mentor, the originator, the founder and the leader of the group called the Emotionalists. The Emotionalists uncover all that is inside of us, very often hidden, barred, perfectly concealed, that is our deepest feelings. They let them speak and give us a chance to see our innermost emotions

The Emotionalists create art consciously, both for themselves and the viewers. In their opinion the artist and the viewer being on both sides of the creative process have an equal right to experience, to feel, to be filled with emotions. At the same time, they perceive emotions not in terms of chaos or trembling, as one could imagine, but as a kind of order, a return to the laws of nature. They replace experiments with the natural truth. They do not believe in the quest for modernity at all costs, because they see it as a trap, sometimes leading to ridiculousness.

In an newspaper interview, Lubomir Tomaszewski as the founder of the Emotionalists explained: “In (…) the 20th century, there was general chaos in art. (…) When the idea of ‘art for art’ came about (…) the most important goal was lost. (…) art [became stripped of] what was the strongest and the best side of human activity – moods, feelings, and emotions. Works of art turned into banal jokes. (…) [ Most art] lost its own visual or plastic language and it began to require an outside philosophical-literary interpreter.”

The clear and straightforward message that Tomaszewski and the Emotionalists communicate is “Less show, more content”. The real worth has become highly valued again: the real worth meaning works of art created by people for people, works bringing tears to your eyes, making you laugh or stirring up your inner anxiety, works that remind you that the most important is the human being and his or her context, namely nature. Or maybe sometimes the human being constitutes the context for nature? Because very often nature and the forms created by nature are the most important points for the Emotionalists and for Lubomir Tomaszewski himself. Works of nature have contributed to the creation of many works of art. Nature acts first, later acts the human being. This is why we can find so many inspiring and extraordinary landscapes, pieces of wood, bark and tree roots in sculptures and paintings. To his or her surprise, the viewer often discovers how an inconspicuous fragment of a root found by the artist becomes meaningful in a sculpture, how important it becomes, how much emotion and energy it conveys, how much movement and space it imparts to the work of art.

The Emotionalists have exhibited their works in numerous places in the United States, France, Germany and Poland, including New York, Cambridge, Harvard, Nuremberg, Warsaw, Sandomierz, to name but a few.